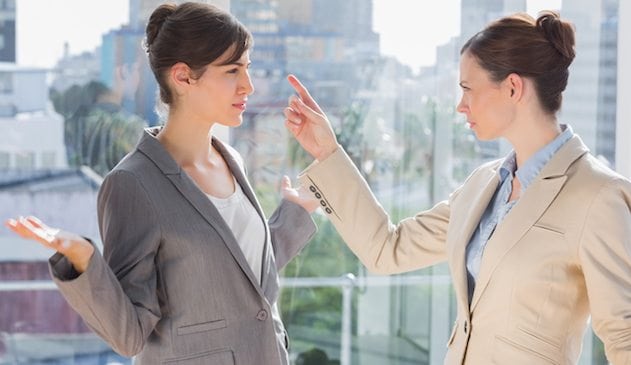 No matter where you work there’s bound to be occasional conflict.

When it occurs, it can be swiftly resolved when both parties leave out emotions; clearly communicate concerns; respect differences of opinion; and rise to a mutually beneficial resolution. Through practice of this extremely effective formula, professionals will develop the habit of shutting down conflict before it arises. The only problem is that it’s not employed often enough. After all, we’re only human and tend to give into emotions and avoid uncomfortable confrontations.

When working as an internal coach, I’m often asked to facilitate discussions between conflicting parties. While this type of informal mediation is quite successful, conflict can be avoided through calm, thoughtful dialogue and clarity of communication.

Coaching helps professionals develop and successfully employee these skills. This begins with widening the lens, challenging the client to look at the bigger picture including the third perspective.

In addition to considering all angles, coaching focuses on diffusing heated and hurt emotions while developing a strategy for effective communication. Words can be weapons but they can also heal, so to use them effectively you must choose wisely and employ a neutral tone during delivery. While it’s important to thoughtfully manage conflict when it comes your way, don’t be part of the problem.

Here are five rules to apply that will help you avoid stirring up toxicity and being party to conflict in your workplace.

Thoughtfully consider using coaching for conflict resolution, as it is the best way to prevent heated workplace disagreements. Coaching can help you confidently address conflict when it occurs and diminish future conflict in the workplace. Coaching for conflict resolution empowers professionals to develop, hone and employ the skills necessary to resolve and prevent conflict in the workplace. But don’t wait until trouble arises, start today. Ask your coach to help you build skills and develop strategies to reduce workplace conflict and diffuse any future confrontations.

How to Be Career Happy? Apply the 5 Rules For Diminishing Conflict

I hope this article provided you with a few applicable ideas for success. I would be honored if you shared this on social media. And speaking of sharing, please share your own ideas and experiences below. Together, we can build a happier career community.